DURBAR OF GHANAIAN COMMUNITY LEADERS AT THE RESIDENCE OF THE AMBASSADOR, ON SATURDAY, 15TH JUNE, 2019

A durbar of Ghanaian Community Leaders in Rome, Italy was held on Saturday, 15th June, 2019, at the Residence of Her Excellency Mrs. Eudora Hilda Quartey Koranteng, Ghana’s Ambassador to Italy. This was the first encounter of the Ambassador with a cross-section of the Ghanaian community. The purpose of the Durbar was to enable a meaningful and constructive interaction with the Association Leaders with a view to promoting the interest of Ghana. H. E. Joseph K. Akudibilah, the Ambassador of Ghana to the Holy See was also present to support Ambassador Quartey Koranteng.

Ghanaian Associations which were represented at the Durbar included Executives of the New Patriotic Party (NPP), led by Chairman Mr. Steven Adjei Ameyaw, Executives of the Local Branch Council of Ghanaian Nationals’ Association in Italy (COGNAI), led by its President Mr. Kofi Azaletey, other Association Leaders as well as Traditional Rulers. There were also representatives of Religious bodies including the Catholic Diocese, led by His Eminence Cardinal Appiah Turkson, Muslim Associations as well as the Pastors Union. Ghanaian Staff at Food And Agriculture Organisation (FAO), World Food Programme (WFP) and International Fund for Agricultural Development (IFAD) were also represented.

In her address, Ambassador Quartey Koranteng explained that her vision was to ensure that the aspirations of President Nana Addo Dankwa Akufo-Addo, under the economic transformational agenda of ’Ghana Beyond Aid’ would be well executed during her tenure of office. She took the opportunity to apprise the gathering of the various Government flagship programmes such as the implementation of the Free Senior High School, the One District One Factory, One Village One Dam, Planting for Food and Jobs, Rearing for Food and Jobs, amongst others. In this regard, she urged the Representatives to encourage Ghanaians to visit Ghana regularly to be abreast with the extent of progress made. She also urged them to participate in the Ghana Diaspora Celebration and Homecoming Summit scheduled to take place from 3rd to 6th, July, 2019, in Accra. She stressed that the Summit was specially designed to recognize and celebrate the immense contributions of the diaspora towards nation-building.

In her concluding remarks, the Ambassador commended the Diaspora for their commitment to national development. She assured them that Mission would ensure that consular service would reach them in their regions and also work towards the biometric and online systems for better consular services. Ambassador Quartey Koranteng also called for unity among all the groups, noting that there would be strength in unity, and a lot more could be achieved when there was a united front.

There was an interactive session during which some of the Ghanaian Association Leaders raised concerns including, among others, the issuance of the Ghana Card, collaboration between Ghana associations in Italy and Institutions in Ghana, the establishment of a diaspora fund, the implementation of Representation of the People Amendment Act (ROPAA) and the possible commencement of the operations of Honorary Consulate in Brescia.

A reception was held afterwards. 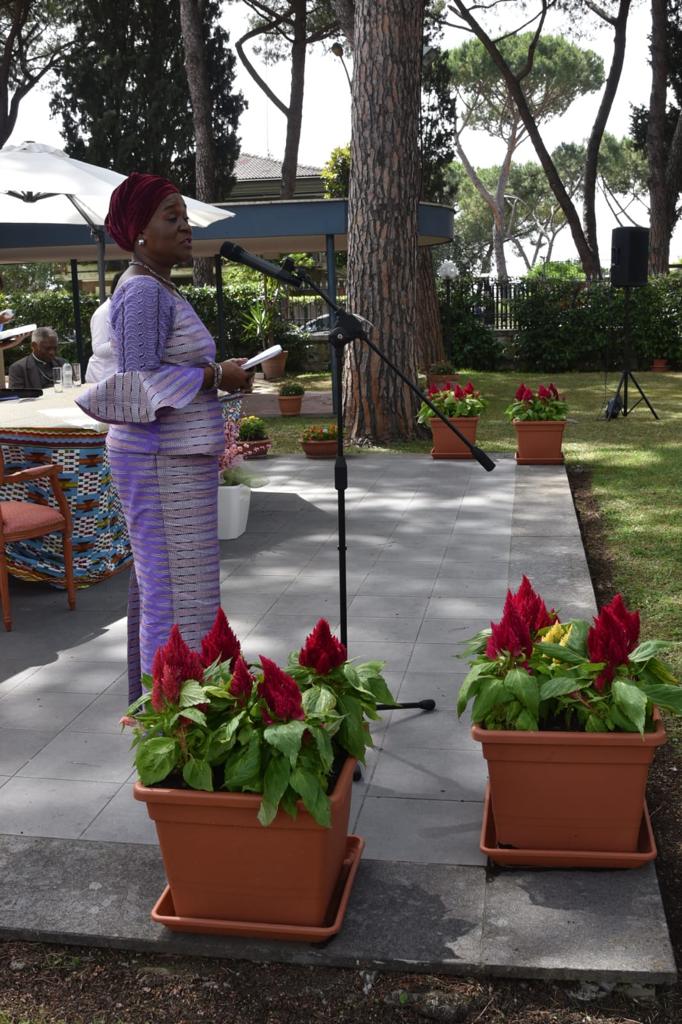 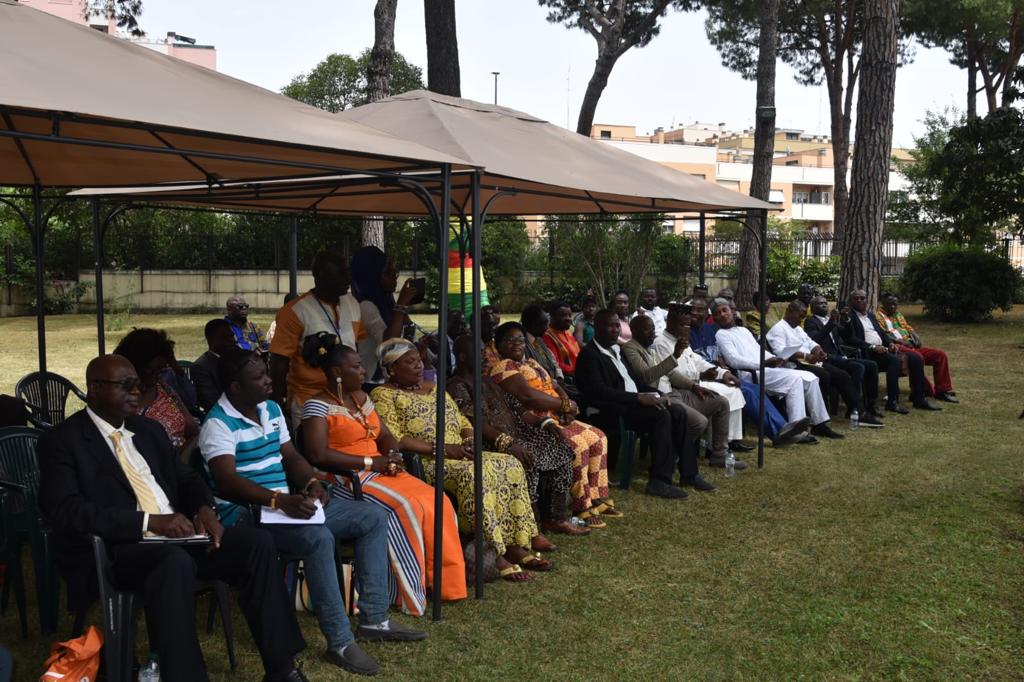 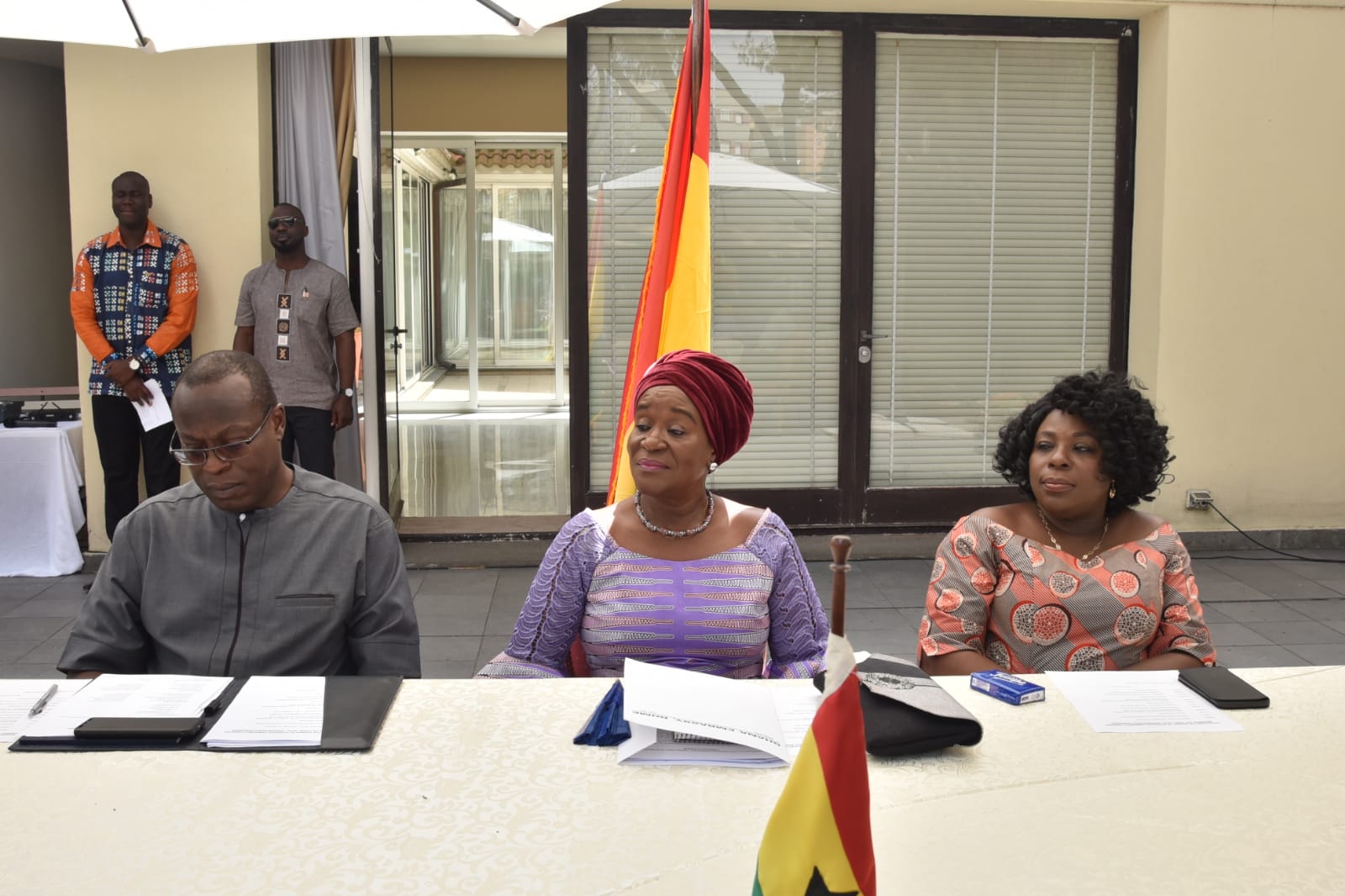 H.E. Ambassador Quartey Koranteng with the Head of Chancery, Mrs. Evelyn Ofosu-Amable and the Head of the 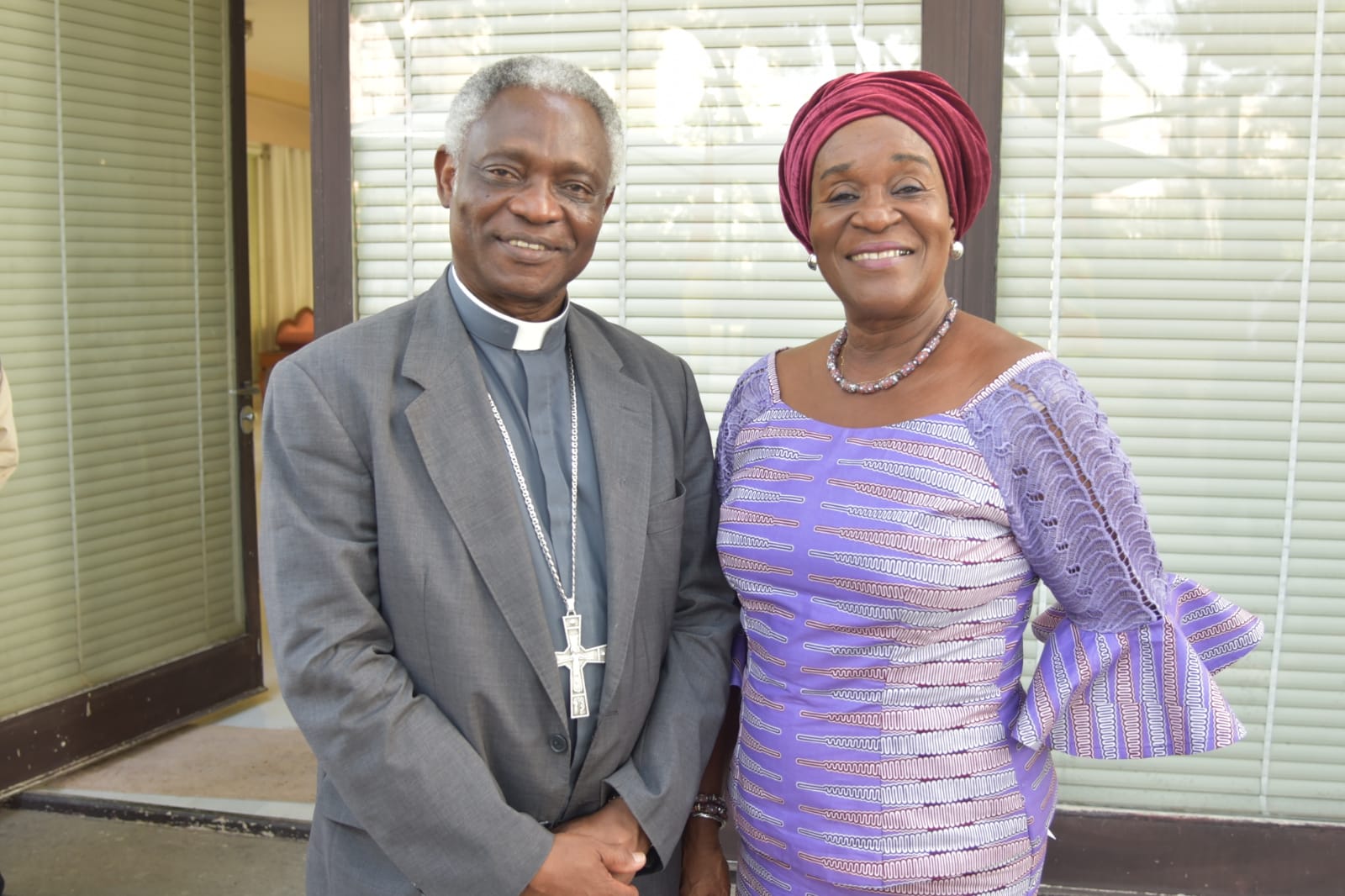 H.E. Ambassador with some members of Staff of Rome Mission 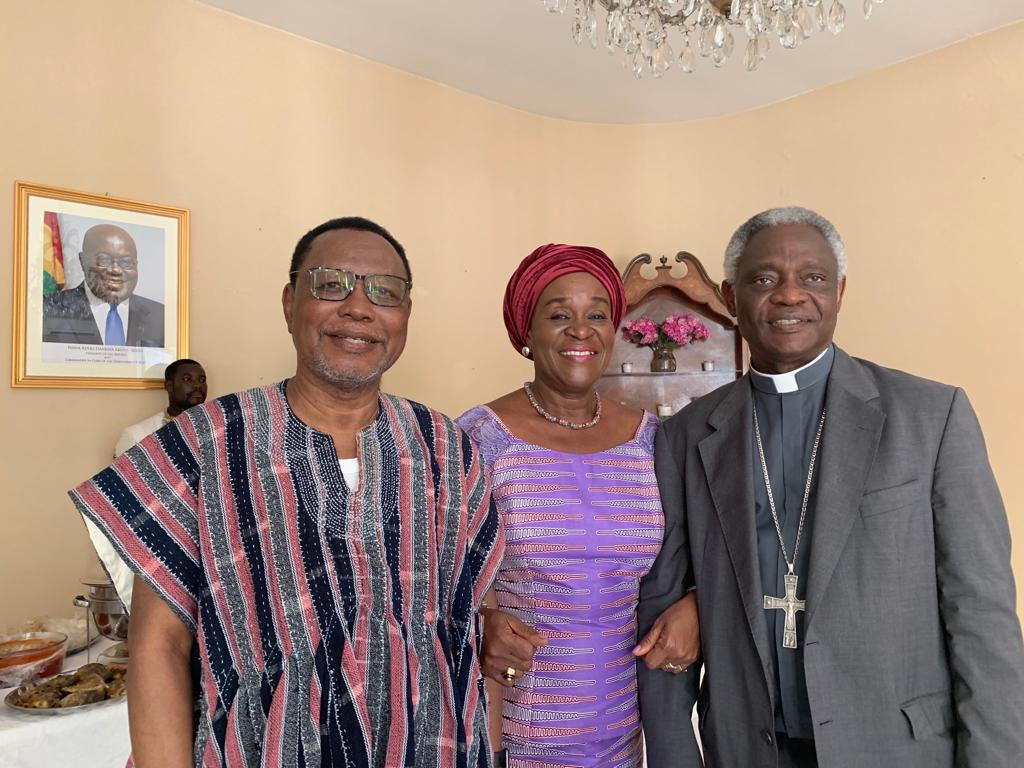 Ghana to the Holy See 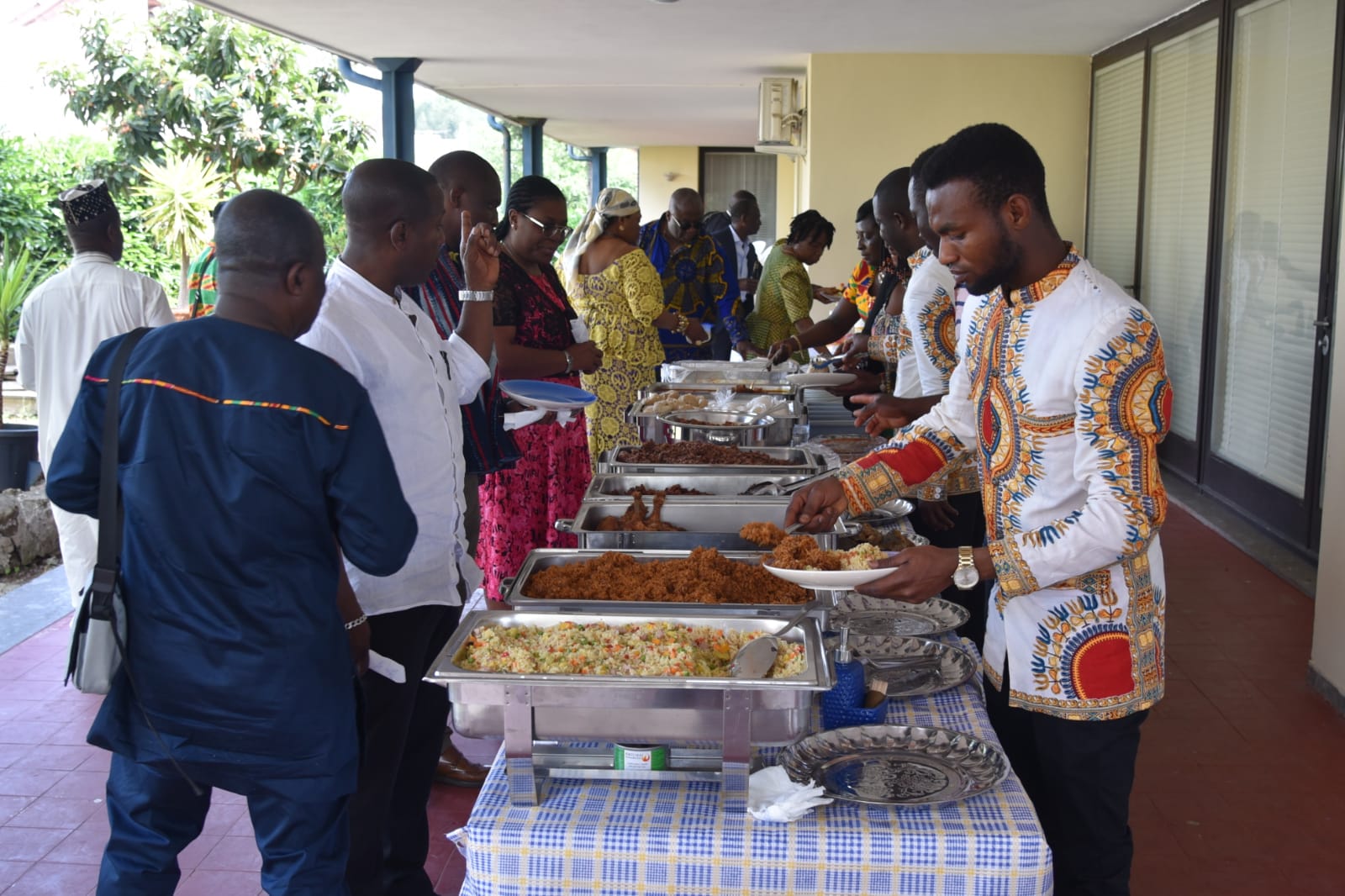 Members of the Ghanaian community being entreated to a reception

The Embassy takes care of the interests of the sending state (Ghana) in the receiving state (Italy) as well as its countries of concurrent accreditations. These countries are Slovenia, Montenegro, Serbia, San Marino.